Consisting of 82.000 small photos, one taken every 6 minutes, Lightmap lets you see one whole year at a glance.

At midnight December 31st 2012, a camera on the roof of M Museum (Leuven, Belgium) started taking pictures of the sky, one every six minutes. That’s 240 pictures every 24 hours. An installation inside the museum automatically printed the pictures on small plastic cubes measuring 8 x 8 mm. Lightmap "ticked" away one plastic cube every six minutes, leaving a trace of what time essentially is: the movement of the Earth around the Sun. The process ended one year and 82.000 blocks later, on December 31st 2013.

The result, Lightmap, offers an overview of the changing weather and light conditions in Leuven during the year 2013. The eye-shaped image shows the passing of the seasons as one strong "pulse" or "beat" of sunlight: the increase and decrease of light over the course of one year.

A production of Werktank with the collaboration of GroepT and M - Museum (Leuven)
Software: Wim Lemkens. 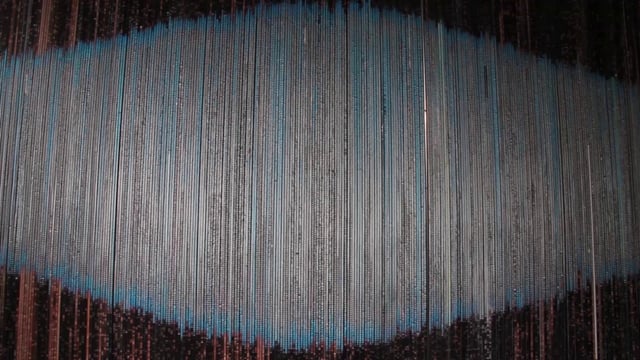 Ief Spincemaille's artistic journey crosses the visual arts, design and performance and a diverse range of working contexts. Exploring the boundaries of his field of work (that of the arts), he plays with its existing frameworks and shapes. Not just out of the joy of playing a formalistic game, but from the necessity to find new forms that respond better to his imagination.

His projects always arise from a childish wonder at simple phenomena. Things that are so close and familiar that they remain invisible: Earth’s curvature, the presence of sunlight, our farthest neighbor on the other side of the world, the shortening and lengthening of the days...

Spincemaille succeeds in combining wonder and poetry with a strongly committed and social and political practice. In so doing, he continues avant-garde traditions but translates them into a radical new contemporary form.

Ief Spincemaille obtained his master's in Philosophy at the University of Leuven and studied jazz, modern music and music and technology at L’AULA de Música Moderna i Jazz, Barcelona. His work is supported by Werktank.