The ACCELERATE Award is a part of the programme called Arts at CERN, where the world's leading particle physics laboratory CERN in Switzerland combines cutting-edge scientific research and achievements with progressive art practices. In 2017, at the initiative of Monica Bello, curator and head of Arts at CERN, KONTEJNER from Zagreb, an organization dealing with art practices at the intersection with science and technology, was invited to collaborate with Arts at CERN. Tomo Savić Gecan has won the award and participated in the artistic residency at CERN.

Since 2011, CERN has introduced a program dedicated to art practices - Arts at CERN through which international artists have the opportunity to establish dialogue and exchange ideas with some of the greatest scientific minds of today, immersing themselves into theories of time and space and encountering cutting-edge technologies used in scientific experiments. The program includes artists from different disciplines, from contemporary dance and design to music and visual arts. More than 40 artists and art collectives from all over the world were present at CERN's transdisciplinary residential programme, including internationally renowned authors such as Bill Fontana (USA), Anselm Kiefer (DE), Ryoji Ikeda (JP), artistic duo Evelina Domnitch and Dmitry Gelfand (NL), semiconductor (UK).

One of the programs at Arts at CERN is a one-month residency called Accelerate@CERN, which is implemented through the partnership of Arts at CERN and partner countries. So far, Switzerland, Austria, Greece, Taiwan, South Korea, Lithuania, United Arab Emirates have participated in the programme. Each partner country announces a local open call and an international jury selects the artist. During the residency artist has the opportunity to undertake interdisciplinary research while intensively cooperating with top scientists of different profiles. For that reason artists who stay at CERN, where the basic constituents of matter are being studied, is not only a place of inspiration but also a place of immense resources in terms of knowledge and technological tools. The artist has the opportunity to visit experimental laboratories, learn about the technology used in the scientific research, and see numerous instruments of enormous strength and proportions, including the famous the Large Hadron Collider as well as sophisticated data processing centers.

Selected project for the ACCELERATE Croatia Award is a continuation of Tomo Savić Gecan's work on the Untitled 2016, which was carried out in cooperation with Van Abbemuseum in Eindhoven, Netherlands. The work is based on the idea of realization of the physical and mental relationships that visitors have with space. Starting from the fact that the changing characteristics of space (such as light, air humidity, temperature, and dimensionality) reflect the inner state of the visitor, the artist collected the parameters of their emotional changes during Van Abbemuseum visit (heart rate, breathing, skin temperature etc.). The collected reactions were shown in a specially constructed gallery located in Zuidplein, the business district of Amsterdam. The walls, temperature, and light of the pavilion were changed according to the changes in the emotional state of visitors to Van Abbemuseum.

See below the Arts at CERN-u promo video and statement from Mónice Bello, head of Arts at CERN. 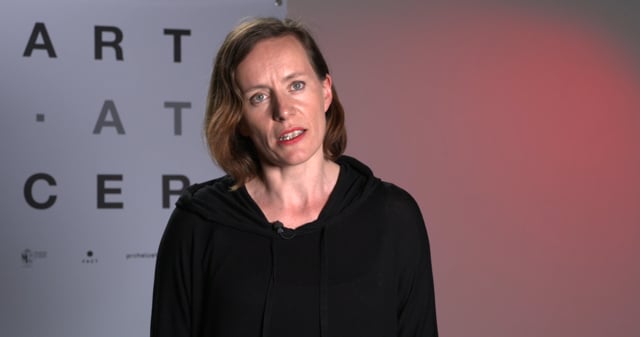