The third series of the Short Circuit project involved the students from the Academy of Fine Arts, the Department of Art History at the Faculty of Humanities and Social Sciences and the Department of Biology from the Faculty of Science in Zagreb. Weeks of research and discussion on hybrid and symbiotic relationships in nature and technology have brought third-cycle students of the Short Circuit project to the Touch Me festival. Through the three weeks of the festival, students joined forces, took up space and developed the artistic research “ERROR 404”.

When people have connection, they feel compassion.

other life forms, and including the human beings.

And they become part of a fabric of “we”, instead of “I.”

As the attitude of art history changed to the motif of nature, over the course of centuries, the human relationship towards the living world around us changed as well. However, despite the many aspects of accelerated technological development, it is safe to say that our relationship with the environment deteriorated significantly with time. From human beings defined as part of the ecosystem, we became human beings who (self-willingly) place themselves at the top of this stratification – a gross misconception of which we are reminded daily by pressing climate change and other urgent crises, this year more acutely than ever.

Amidst a cacophony of global debates on various bioethical issues that have been From human beings defined as part of the ecosystem, we became human beings who (self-willingly) place themselves at the top of this stratification for decades, the ethical question of human relationship towards the environment is only just beginning to resonate loud enough to reach our local community. Prompted by such unsustainable negligence, by stepping away from blinding anthropocentric perspectives and by employing an interdisciplinary approach, we have begun an artistic-explorative process that re-examines the hybridity of the relationship between humans and the nature, within which we achieve our physical and spiritual realization.

We have chosen the city of Zagreb, treating it as a unified being whose anatomy – the sewage system – implies a mysterious and invisible world, a faithful reflection of its surface. The Student Centre of the University of Zagreb is an important element of Zagreb’s structure and, since 1957, symbolizes a sort of habitat for young intellectuals and other symbionts, while its sewage may be observed as a reflection of their well-being.

In the spirit of sustainable development and rational use of natural resources, we have examined the use of edible oil in Student Centre restaurants, as well as the habits and awareness of its “inhabitants,” we have studied the complex systems of city sewage and water supply, constantly encountering dead-end manholes and different types of errors along the way; from non-existent websites and broken links, unavailable or “non-existent” information, to bureaucratic sagas and the customary game of shifting responsibility to someone else.

Just as minding the intake of nutrients into our organism and maintaining mental hygiene, we must take equal responsibility for the complex system of our city’s intestines and stop deceiving ourselves that the not visible is not our responsibility; whether it disappears down the drain of our sink or lurks in the subconscious nooks of our mind, shutting our eyes to the consequences of accumulating fat, both in our city’s wastewater system (fatberg*) and in the ducts (circulation) of the human body. As professor Michel Serres deftly pinpoints in his book The Parasite (1980; 2007):

“We repress what bothers us. What is repressed, but remains anyway, still parasites communication.”

Following the principle of circular economy, which we promote, part of our artistic production consists of soap materialized in the process of our research, imitating the process of saponification that can occur in certain underground tunnels. By transferring the “ERROR 404” pipes into the underground recesses of Zagreb, we complete the first cycle of our research. However, the search for solutions to errors (ostavit u kurzivu) against our own habitat remains open to question, hoping to encourage, not only public discourse, but consistent action as well.

*HTTP 404, 404 Not Found, 404, 404 Error, Page Not Found, File Not Found, or Server Not Found error message is a Hypertext Transfer Protocol (HTTP) standard response code, in computer network communications, to indicate that the browser was able to communicate with a given server, but the server could not find what was requested. The error may also be used when a server does not wish to disclose whether it has the requested information. (from Wikipedia, the free encyclopedia)

*A fatberg is a congealed mass in a sewer system formed by the combination of flushed non-biodegradable solid matter, such as wet wipes, and congealed grease or cooking fat. Fatbergs became a problem in the 2010s in Britain, because of ageing Victorian sewers and the rise in usage of disposable (so-called “flushable”) cloths. (from Wikipedia, the free encyclopedia)

Special thanks to the Student centre of the University of Zagreb, factory of construction elements Eurobeton d.d., company Vrbovčanka d.o.o., company Agroproteinka,
and dr. sc. Ivan Mlinar, dir. prof. from the Faculty of Architecture, on his great hospitality and willingness to cooperate and to mag. educ. art. Antonio Kutleša, external associate at the Academy of Fine Arts, many thanks for his help to realize the artistic work.

Iva Ćurić (assistant at the Department of Art Education, ALU),

Vesna Gulin (assistant at the Department of Biology, PMF)

Short Circuit 2020 is a part of project Re-Imagine Europe co-funded by the Creative Europe Programme of the European Union. 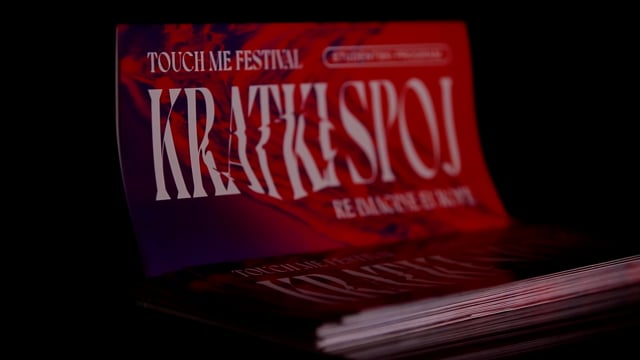