Temporary Objects and Hybrid Ambients, retrospective exhibition of Marko Batista presented for the first time in 2014; nine artworks produced in the last six years are presented to the audience. This responsive overview on the artist’s work reacts to the audience in space, while site-specific exhibition set-up changes depending on the features of space where it is presented. Batista’s work, situated at the intersection of performative intermedia practices, sound and visual installations, and physical-sensorial experiments, explores both the material nature of the technology as well as our perception of it. Batista on one hand de-mystifies technology since he uses low-tech elements and visually in a clear way exposes the technological processes. However the artist in his installations also introduces the element of the unknown and moves on the cusp between controlled and chaotic modular systems. By setting up the temporary and process based in a gallery environment, Batista in this exhibition emphasizes also the transformation of time through events and duration. 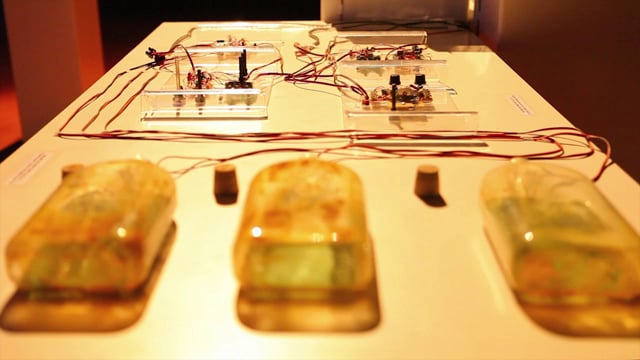 Marko Batista (1976) is a Ljubljana based tech-mixed-media artist, sound researcher, video experimentalist and AV performer, born in in Tito’s Yugoslavia. Batista focuses on themes such as displaced soundscapes, video transformation processes, networking data, collaboration, linking concepts, hybrid spaces, politics of art and other fields of contemporary media art. He graduated from the Academy of Fine Arts in Ljubljana and attained a Master of Fine Arts degree from Central Saint Martins College of Art and Design in London. Batista is a founding member of the experimental multimedia group Klon:Art:Resistance.