Ljubavnice (HR) I would rather be a cyborg than a goddess

THE SEVENTH is currently our conceptual construction that we discover seeking and producing information about her.

The materials that we gather through the research form her fragile identity that will gradually attempt to communicate with the surroundings of the real and the virtual world. Her paradigm is the establishment of the ability to react independently to new situations. We live in a time in which technology changes the understanding of living to date and allows us to achieve the impossible. And this is the time in which our ecosystem and our planet are collapsing, changing and vanishing before our eyes. Social changes are taking place in line with climate change, there is more and more of the unstable, of the unreal.

A look into the future shows a climatic catastrophe and journeys in space constantly changing the position of us as subject in the world and at the same time testing out whether we are really the most intelligent species or just a transitional level. The human body is already changing so as to adjust to what is at hand. This opens up a space for thinking and work, for new possibilities. Artificial identities are part of our virtual reality and their existence in capitalist society is extremely complex. Accordingly, we wonder if we can create artificial life that will be interested in the forms outside the political platform where artificial intelligences often generate the repetitive patterns of consumerism. What can we offer it? What kind of archive can we create for it?

The chief application of artificial networks is manifested in the search for dependence among data that are not in an exclusively linear relationship and yet can be united into a single complex input group.

The collective called Ljubavnice (Mistresses), composed of six individuals, this time has collected data so as in the future to be able to form the Seventh Mistress. She is stirring. Stirring and being transformed. Coming into being differently each time, she is the possible combination of a thousand combinations. She is, is never the past.

She is the future, imminently and now.

This work has been commissioned and produced by KONTEJNER in collaboration with
Sonic Acts, as part of Re-Imagine Europe, co-funded by the Creative Europe Programme of
the European Union. 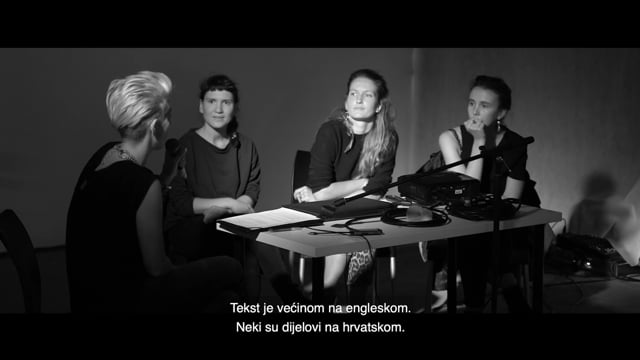 The Ljubavnice collective (2015) is one of the biggest Croatian women's art collectives, consisting of six young artists: Tamara Bilankov (1988), Hrvoslava Brkušić (1982), Stella Leboš (1988), Luana Lojić (1991), Ivana Pipal (1990) and Ana Vuzdarić (1984). Installations of an ambiental character in the shape of site-specific projects are an important part of their work. The collective is focused on an interdisciplinary blending of art and science, each exhibition involving collaboration with scientists and other experts. The work of the collective is characterised by radical and formal procedures and research outside normative systems. Typical of their work are intuition, intellectual curiosity, creative inventiveness, self-reflection, courage and experimental ardour. Exhibitions work like laboratories, in which art and the empirical overlap in an ideal manner. In the last three years Ljubavnice have put on a number of projects on topics from astronomy, astrophysics, chemistry, hypnosis and regression, power supplies, self-sustaining systems and current problems of climate change. The interest in social issues gives the work additional power and arouses the attention of the general public.