Empathy Swarm is an emergent system of ten autonomous robots that acts as a human-machine interface and creates an ecosystem for man-machine cohabitation.

The swarm is a society of robotic creatures based on the equality of all members and constantly negotiates and balances the needs of all individuals. In its role as a human-machine interface the robotic system simultaneously activates and reacts to the emotions of the human actant. While the swarm expresses itself through its movement, the human responds subconsciously through motion and facial expressions revealing their emotional state. Together these mechanisms create a bio-feedback loop which shows the interdependence of the two species.

On another level, Empathy Swarm defines its very own definition of what it means to be a utility apparatus, which is based on the idea of machine education, leading away from an optimization concept of human set goals in the form of machine learning. Instead, the idea of self-drive and self-determination of the robotic machine is implemented; it does not evolve from a position of suppression or machine revolution against human supremacy. On the contrary, Empathy Swarm gives space for the vulnerability of the robotic offspring and fosters the careful convergence of the two species into an ecosystem and society of empathy and compassion for each other and among themselves. The human and robotic mind are merged into an extended hive mind that is a source of information and inspiration for future societies and can be utilised as a preventative medicine for a dystopian future.

EMAP/EMARE: The work is coproduced by KONTEJNER within the framework of EMAP / EMARE and co-funded by the Creative Europe programme of the European Union. 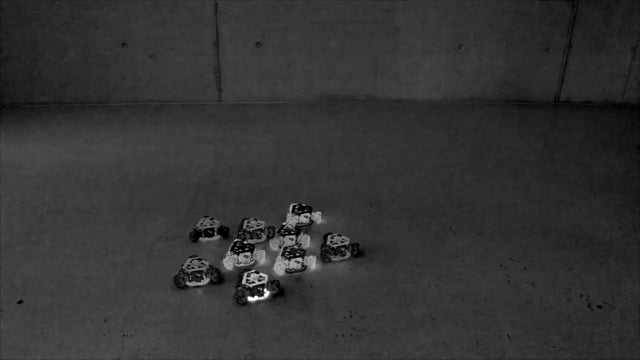 Donovan's artistic work relates to a specific field of acoustics and robotics merged with visual arts since 1996. He exhibited and presented his work all around the globe, in renowned exhibition spaces and festivals such as ISEA Dubai, WRO festival in Poland, NEXT festival in Slovakia and Museum of digital art in Zürich. As a duo Adam Donovan and Katrin Hochschuh exhibited Curious Tautophone – Tensor field Ontology as part of Experimenta Make Sense in Australia and have performed at major European Sound art festivals in Poland and Slovenia. Currently, as part of EMARE they work on Empathy Swarm which explores non-anthropomorphic swarm robot behaviour using emotion recognition reinforcement. Together they create sophisticated robotic mechanisms that play with the unobtrusive uncanny systems within us. Their works and machines invoke an otherness or timelessness that is only present in the here and now.

Hochschuh has an architectural background in digital and robotic fabrication, exploring architectural geometries, algorithms, swarm simulation and interactivity. She has worked together with François Roche in his experimental practice New-Territories at the intersection of speculative architecture, experimental short movie production, and art. In that scope, the Timidity Symptom was exhibited at the Architecture Biennale Venice 2014 and she was also part of the production of a collaborative piece With with Carsten Höller, exhibited at Air de Paris, France (2013) and at Donaufestival, Krems, Austria (2013). Together with the ETH Zurich’s MAS she exhibited a prototype of a robotically fabricated pavilion at the Design Biennale Zurich and for the Museum of Digital Art, Zurich she developed a digital embroidery project.