One or More Schachtophones, the new schachtophone audio-visual installation for playing schachtophonies; a sound sculpture for 10 performers made out of springs, that is at the same time the basis for the performance E.P.Z. and the reflectophone installation/performance 9,81 m of Accelerationism.

The performance E.P.Z. relies on the cut-up poetry of William S. Burroughs and the African horror story Jeddade Jeddade in creating improvised music lines by using schachtophone instruments and musical scores for three performers. By investigating the word “virus” in its auditive qualities and meaning, the narrative of the performance is based on the Ebola Zero Patient of the West African Ebola epidemic – a boy who is believed to have caught the virus by playing an instrument made out of wood in which infected bats were living in, and thus triggering the epidemic. E.P.Z. is performed by Damir Bartol Indoš, Tanja Vrvilo and Helge Hinteregger.
9,81 m of Accelerationism is based on an artistic fusion of texts #Accelerate: Manifesto for an Accelerationist Politics by Nick Srnicek and Alex Williams, #Celerity: A Critique of the Manifesto for an Accelerationist Politics by Mckenzie Wark and On Acceleration by Vlado Kristl.

Performatively, the work practices the thesis from Postscript on the Societies of Control, saying “The spiral snakes are much more complex than the trenches of moles”. Schachtophonist mole in the interior of the construction and Schachtophonist snake in the exterior perform the textual fragments recorded and spoken in reflectophones, in 3 x 4 vocal and instrumental units in 9,81 minutes of duration. 9,81 m of Accelerationism is performed by Damir Bartol Indoš and Tanja Vrvilo. 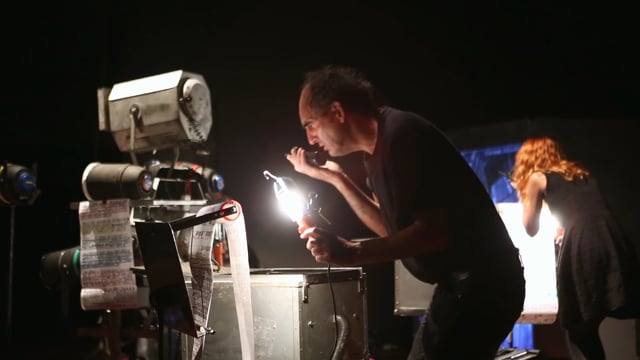 Damir Bartol Indoš (Zagreb, 1957), performer and theatre artist, he creates experimental music instruments, sound sculptures called Schachtophones and graphic partitures. He took a degree in comparative literature and philosophy at the Faculty of Philosophy in Zagreb. During his university days he took part in the work of the neo-avant-garde student theatre group Kugla Glumište and as initiator of the Kugla Group during the 1980s did a number of performances (Gigan Affair, Unmuffled Vibrations, Sixth Allelomorph and so on). As DB Indoš House of Extreme Music Theater, from the 1990s, he created a series of projects and world tours with a variety of foreign and domestic artists and musicians. Since 2005, in coproduction with the SC Culture of Change, the &TD Theatre and in creative collaboration with Tanja Vrvilo he has produced performances with actors, performance artists, musicians and dancers (Chinese Roulette, The Enchantment, Green Green, Book of the Dead (joint direction with Zlatko Burić), Anti-Oedipus and others. He has taken part in various international festivals at home and abroad such as Fringe Festival (Edinburgh), Klangarten Festival (Linz), Franklin Furnace (New York), Roskilde festival, Translacije (Piotrkow), Eurokaz (Zagreb), Extravagant Bodies: Extravagant Minds festival (Zagreb), CAMP – International Festival of Visual Music (Zagreb), etc. He is a permanent collaborator of the &TD Theatre, a member of the Croatian Freelance Artists' Association and the Association of Fine Art Artists ULUPUH. He won the City of Zagreb Medal for promotion of alternative culture in 2009, and was winner of the first prize in the T-HT@MSU competition in 2012 for the sound sculpture Schachtophone. Together with Tanja Vrvilo he won the group award of the Croatian selection at the Prague Quadrennial in 2015.

Tanja Vrvilo, a filmologist, film curator, performer and co-author of experimental theatre productions. She is the author of numerous essays and publications and works regularly as lecturer in the fields of cinema, visual and performing arts. As a performer she participated in many theatre productions and has been co-authoring and performing with alternative performance groups and authors, and continuously with a neo-avant-garde performer Damir Bartol Indoš.