playa, a sound installation that suggests the motion of sea waves. Fifteen acoustic guitars are laid out on the floor, from the ceiling an impressive dense cloud of wire is suspended over the instruments while thirty cables reach delicately down towards the guitars stopping just at the guitar strings. At the end of each cable is a DC motor swinging freely and rotating, with variable speed, a piece of fabric strumming the guitar strings. The swinging is influenced both by the motor and the contact with the strings: the cloud of sounds is constantly shifting in a fluttering harmony as the strings are played differently with each pass. The delicate filigrane music is shaped by random events, planned wave movements and the relations between installation parts. Unpredictable physical features of space, such as temperature, change slightly and slowly the tuning structure as time passes, creating live chord landscape of fragile, living quality. Hypnotic and contemplative, the imaginary journey of playa deals with the concept of chords accumulation and the act of tuning as a strategy, to create sound spaces inside physical ones, blurring the boundaries between the act of composing and tuning. 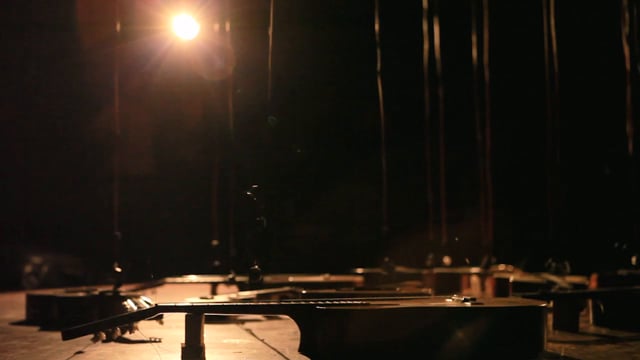 Rubén d’Hers, a guitarist and sound artist from Caracas, Venezuela currently living in Berlin. His focus on sound installation and playing techniques deals with the use of chords as autonomous sound spaces. He studied fine arts in Caracas at the Cristobal Rojas Art School and later electroacoustic composition with Robin Minard at the Bauhaus University Weimar. In Caracas, from 1999 to 2007 he was co-founder and guitarist of the jazz-rock band kRé. Since then he works on his solo project which highlights the use of strings instruments as the main medium of experimentation. His works has been exhibited and performed at venues like ZKM in Karlsruhe (DE), Neues Museum Weimar (DE), Pure Data Convention (DE), SeaM Weimar (DE), LAB 30 Klangkunst Experimente Augsburg (DE), Heart of Noise Festival Innsbruck (AU), Netwerk Center (BE) and at Oficina #1 Gallery in Caracas (VE).